Asked to be identified only as "W", she claimed she is a victim of domestic violence and wants to cut ties with her husband.

"I hope there is someone out there who can rent a vacant room to me and my mother.

"I do not want to stay in the same house as my husband anymore," she told a press conference held by Ipoh Barat MCA coordinator Low Guo Nan here on Wednesday (Sept 28).

"My husband is currently undergoing observation at the Ulu Kinta Hospital Bahagia as ordered by the court," she said, adding that they have been married since 2014.

"I do not know when he will be discharged, (but when he) comes home I will have to face him again," she added.

W said she has suffered from depression since she was young due to stress from studying and could experience seizures if her emotions become unstable.

She is registered with the social welfare authorities as having a mental disability and possesses a Persons with Disability (OKU) card.

"I had a fit in the middle of this year after another heated argument with my husband.

"A neighbour called an ambulance and I was sent to hospital, where the medical officer lodged a police report," she said.

According to a senior police officer, the woman's husband has been charged under Section 324 of the Penal Code for causing grievous hurt.

"The man has pleaded not guilty and the case is pending a court proceeding," he said.

"They need to have the courage to lodge police reports.

"There should be no compromise on domestic violence," he said. 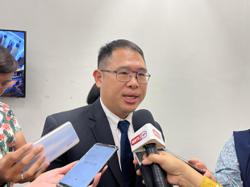