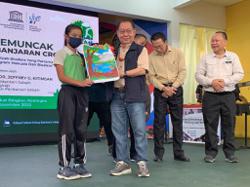 KOTA KINABALU: Serene, cool and surrounded by nature, Crocker Range sounds like an alpine destination in Europe. But far from being an unreachable getaway, this mountainous area is located on Sabah’s west coast.

Due to these characteristics and the fact that it is a lesser-known locality, Sabah Tourism, Culture and Environment minister Datuk Jafry Ariffin feels that this place can be further developed into a nature-healing site.

“Crocker Range is known for its flora and fauna, and these are some of the elements essential for mental well-being or healing,” he said in a statement yesterday.

“We think there is huge potential to make Crocker Range the place to go for nature healing,” he said.

Jafry recently held a meeting with the staff of Sabah Parks, where they discussed ways to promote the parks without having to compromise on environmental conservation and protection, among others.

He said these sort of natural healing qualities of the area may help create a better mental state of mind, reduce stress and promote inner peace.

He said relaxing at places such as Crocker Range can also help to calm a person and give them time and the opportunity to focus on their emotional needs.

Jafry said this sort of tourism concept would be a new experience for local and foreign visitors.

He said the ministry will continue to identify and source for places that have the potential to be developed as new tourist attractions, and at the same time develop and promote existing tourism locations in Sabah.He said complementing infrastructure developments must also come together in line with the ministry’s vision and mission.

Stretching over 100km, the Crocker Range is a mountain range that separates the west and east coasts of Sabah. It runs through several districts, including Beaufort, Penampang, Keningau, Papar, Ranau, Tambunan, Tenom and Tuaran.

The Crocker Range Park is known to harbour 106 species of mammals (the three most endangered species are the orang utan, the sun bear, the clouded leopard), 265 species of birds, 52 species of reptiles, 67 species of frogs, and 26 species of freshwater fish.