KUALA LUMPUR: A government letter of support (LOS) to secure a US$3bil loan for the joint venture between 1Malaysia Development Berhad (1MDB) and Aabar Investment BVI Co was issued “in great speed” within days.

A former Finance Ministry deputy secretary-general told the High Court that the issuance was “a first of its kind” and was done without due diligence on the project cash flow, Bernama reported.

Datuk Siti Zauyah Mohd Desa, 63, said that in her 25 years’ experience in the ministry, that was the first time an LOS was issued by the ministry without due diligence being done.

“There was no current assessment on the joint-venture investment. In fact, there was none, nothing for us to do due diligence,” she said during re-examination by senior deputy public prosecutor Datuk Seri Gopal Sri Ram in former prime minister Datuk Seri Najib Razak’s trial for misappropriation of RM2.3bil in funds from 1MDB.

The US$3bil loan was approved by the government via a support letter signed by Najib, who was Finance Minister back in 2013.

Asked by Sri Ram why she did not approach Najib herself to air her concerns over the issues surrounding the sovereign wealth fund, Siti Zauyah said she did not have direct access to the then prime minister.

“However, I did approach (then) Finance Minister II (Datuk Seri Ahmad Husni Mohamad Hanadzlah) but he did not want to get involved. I cannot bypass my bosses to go to the PM. It is not the practice for an officer to go directly to the PM,” the 26th prosecution witness said.

The senior DPP also questioned her about her previous testimony, where the witness said she was instructed by former Treasury secretary-general Tan Sri Dr Mohd Irwan Serigar Abdullah to continue processing the LOS despite the lack of due diligence.

Sri Ram: When you did what you did in relation to this LOS transaction, was it open to you to act in defiance to instructions by Mohd Irwan? Can you defy his order?

Siti Zauyah: I can advise him but it is really up to him whether to accept it or not ... but he did tell me this (issuance of LOS) is urgent because it comes from the PM. I had to do it.

Najib, 69, is facing four charges of using his position to obtain bribes totalling RM2.3bil from 1MDB funds and 21 charges of money laundering involving the same amount.

However, she said she did not know if the settlement involved Najib. 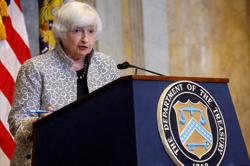