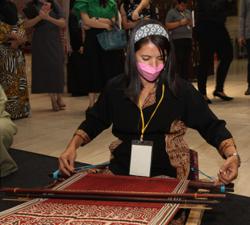 PUTRAJAYA: Over 300 artisans from Asean countries and other regions are participating in the 8th Asean Traditional Textiles Symposium 2022.

The biennial symposium, which is being held from Sept 25 to 30 at Marriott Hotel Putrajaya, was officiated by the Yang di-Pertuan Agong Al-Sultan Abdullah Ri’ayatuddin Al-Mustafa Billah Shah yesterday.

The theme of the symposium was Celebrating Textiles: A Journey.

Yayasan Tenun Pahang Diraja organised the event to discuss and share information about the preservation and sustainability of original textile weaving in the Asean and surrounding regions.

In his speech, His Majesty hoped that the biennial symposium would continue to be held in other countries in the future.

“The response to this event is overwhelming, with more than 300 participants. I hope all participants will have a great time here,” he said in his opening address.

His Majesty also shared Tunku Azizah’s commitment to ensuring the success of the symposium.

“I have to tell you, the Raja Permaisuri is very busy making sure this symposium is a success. I want to share with you that I can see the amount of interest she has put into this event. She sometimes would not sleep at night.”

In her speech, Tunku Azizah shared how prominent members of the royal households played an integral role in preserving heritage.

“I have every confidence that the role of the palace in preserving our country’s rich heritage will be continued by the younger royals.

“I have a vision, which should be everyone’s vision, to leave our precious traditional craft as a legacy for future generations. That is my hope.

“As a custodian of culture, I take it upon myself to perpetually stress the importance of preserving, reviving, reminding and leaving a legacy, which is not only about textiles but the culture and heritage in entirety,” she said.

Her Majesty also commended the government’s support through various ministries in efforts to promote and preserve age-old traditions of making arts and crafts.

She also announced the establishment of the Royal Malaysian Society of Artisans, an association to recognise a handful of skilled artisans in recognition of the past to benefit the future. 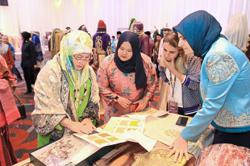