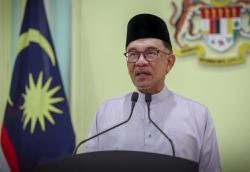 PUTRAJAYA: The Rural Development Ministry wants to transform preschools (tabika) of the Community Development Department (Kemas) into smart classrooms in line with digitalisation.

Minister Datuk Seri Mahdzir Khalid said the ministry had applied to the Finance Ministry for the allocation under Budget 2023.

He added that the ministry aimed to equip at least 10% of the 11,000 Kemas preschools with digital facilities in the first phase.

"We will strive to equip Tabika Kemas as smart classrooms, with at least 800 initially," he told reporters after opening the second triennial delegates conference of the Peninsular Malaysia Kemas Staff Union here.

According to Mahdzir, digitalisation is crucial, and Kemas cannot fully rely on the old teaching methods.

Earlier, in his speech, the minister announced a utility fund of RM30,000 for the union.

The conference was attended by about 300 delegates and observers of the union from 12 branches across the peninsula. - Bernama