KUALA LUMPUR: Three Malaysian NGOs have called on the government of Laos to help secure the release of Malaysians held captive in that country by a fraud employment syndicate that had lured them with offers of high-paying jobs.

MHO secretary-general Datuk Hishamuddin Hashim claimed that 700 Malaysians were being held against their will, forced into illegal activities such as scamming and online gambling, and subjected to threats and torture.

He also said that the victims had lodged many reports with the Laotian police but claimed that little action had been taken by the authorities in the matter.

Hishamuddin said 10 victims were rescued from the syndicate through the intervention of the Malaysian embassy in Laos, and that four of them had escaped from that country.

He also said that he had learned that the syndicate was offering rewards as high as US$2mil for the capture of those who had escaped.

MCCC president Tan Sri Musa Hassan advised the victims who had returned to Malaysia to lodge police reports as their statements would be useful in identifying Malaysians, if any, who were involved with the syndicate.

"Please report to the police so that your statements can be recorded because we would like to know whether there are syndicate members here who are involved in taking our citizens to that country.

"At the moment, we are working closely with Wisma Putra and the Royal Malaysia Police to get all (relevant) information and get them (the victims) released to return to their families," he said. - Bernama 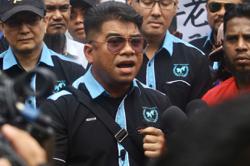