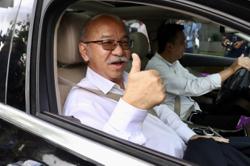 KOTA KINABALU: The Sabah Cabinet has agreed in principle to limit the term of the Chief Minister to two terms, says Datuk Seri Hajiji Noor.

The Chief Minister said the motion would be tabled at the next Sabah assembly sitting if the people and all assemblymen agreed with the move.

"I have proposed this matter and the Sabah Cabinet has agreed," he said when speaking during the Gabungan Rakyat Sabah (GRS) tour of the east coast Beluran district on Saturday (Sept 24).

"As such, if the people and assemblymen from the government and Opposition agree to this, then we will bring this proposal to the upcoming state assembly sitting in order to amend the state constitution.

"This proposal is another initiative undertaken by the GRS-Barisan Nasional state government," added the GRS chairman.

Beluran was the fourth district visited by GRS in its statewide tour after Keningau, Kudat and Lahad Datu.

Hajiji also said the five-party coalition consists of parties from various races and religions, adding this is the perfect platform to unite leaders and people in Sabah in their pursuit of state rights.

According to him, he said it was about time leaders from local Sabah parties came together under GRS to demand what was owed to the state by Putrajaya as well as to look after the state’s interests.

"We will not compromise in fighting for Sabah rights as enshrined under the Malaysia Agreement 1963 (MA63)," he said.

Besides uniting the local parties, he added, GRS’ objective was also to ensure Sabah moved forward and progressed under a state administration spearheaded by local parties in future.

He said Sabahans must learn from lessons from the past on how disunity had cost them.

"Local parties must unite under this coalition we call GRS. The purpose is to ensure Sabah is developed.

"This is most important as if we continue to argue and be split, we will not succeed in politics, what more at developing Sabah," Hajiji said.

Towards this end, the Sulaman assemblyman urged for the GRS machinery in all areas to be activated to face the 15th General Election (GE15) which could be held at any time.