KUALA LUMPUR: The uncertainty surrounding his candidacy in the 15th General Election (GE15) is among the "concerns" bothering Health Minister Khairy Jamaluddin.

In a light moment during a press conference, the Health Minister was asked what were the "concerns" besides flood issues that were discussed in last Wednesday's Cabinet meeting regarding GE15.

"Concerns? I still have no seat to contest in," Khairy replied, triggering an eruption of laughter at the press conference that was held after he launched the Asia Dermatology & Aesthetic Medicine Summit (ADAMS) 2022 here.

The presser ended without Khairy addressing the question further.

Khairy, who is currently Rembau MP, is speculated to be moving to a different constituency in GE15.

This was after it was made known that Umno deputy president Datuk Seri Mohamad Hasan, who is Rembau Umno division chief, was eyeing the parliamentary seat.

The former Negri Sembilan mentri besar is the assemblyman for Rantau and is looking to move to a federal seat in GE15.

Umno star Khairy still without a seat in GE15 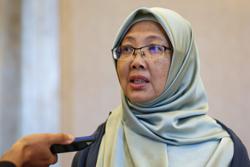