We want to hold GE15 before floods, not during, says Umno Youth chief 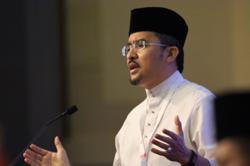 Instead, he said the party urged for the dissolution of Parliament now to make way for the election before the annual disaster happens.

"People misinterpreted that Umno wanted to hold the election during the floods. That’s not right.

"We want it now, just before the flood. We still have at least two months before the flood was expected to take place," he told the media after a book launch event here on Thursday (Sept 22).

However, he added that if the flood took place right after the dissolution of the Parliament, the caretaker government could take precautions such as proclaiming emergency to put a hold on the polls.

"Dissolution (of Parliament) can be done now, before November as the Meteorological Department (MetMalaysia) predicted the flood would only take place at the end of November.

"So, we still have time. The people are overreacting (melatah) to something that hasn’t happened yet. Umno is also against having the polls during the floods," Asyraf added.

The Barisan Nasional youth chief also reinstated that the national poll is important because the current government was formed under compromise between different parties that have clashing views and led to instability.

"The economic and investment community will only have faith in a government that is politically stable... not like right now.

"Even a few days ago, we had former Prime Minister Tan Sri Muhyiddin Yassin and the current Prime Minister Datuk Seri Ismail Sabri Yaakob calling each other out (while both being the government)," he said.

On Monday (Sept 19), Muhyiddin had said that it was better for Ismail Sabri to call for a general election if the country's economy was not managed properly.

The Parti Pribumi Bersatu Malaysia (Bersatu) president said that Ismail Sabri could not be oblivious to the slide of the ringgit – which affected the import of food.

However, Muhyiddin, who is also Pagoh MP and National Recovery Council chairman, said he was not pushing for an early election.

In response, Ismail Sabri pointed out that Muhyiddin himself had the position to advise the government on the economy in his capacity as the National Recovery Council chairman.

"In terms of economy, we have (Minister in the Prime Minister’s Department) Datuk Seri Mustapa Mohamed managing it as well as the Council which is chaired by Muhyiddin.

"The council also advises the government so this is a collective responsibility.

"If it (economy) fails, then everyone fails, including the NRC," he said on Monday (Sept 19).

Asyraf said it has also been long overdue to return the mandate to the rakyat since the fall of the Pakatan Harapan’s administration in 2020, so GE15 had to be done the soonest. 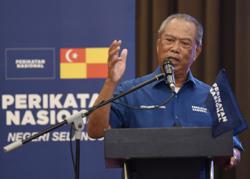