DESPITE repeated warnings from the authorities, Malaysians continue to fall victim to job scams in Cambodia and Myanmar, China Press reported.

An unnamed source revealed that a large group of Malaysian jobseekers are expected to be trafficked to Cambodia in October after accepting what was marketed as a lucrative job offer.

According to a spokesman from the Malaysian Humanitarian Organisation, a victim currently trapped in Myanmar’s notorious KK Park – a place where scam syndicates are known to operate – reported noticing many new Malaysian faces in the area on Sept 17.

It was also revealed that a new batch of Malaysian victims is expected to arrive soon.

The spokesman pointed out that Malaysians were now the primary targets of these job scams as Taiwan had temporarily restricted its residents from travelling to these high-risk countries.

He added that only 62 Malaysians had been rescued, while 164 were still held captive.

> The United Chinese School Teachers’ Association (Jiao Zong) had urged educators not to opt for early retirement to prevent the perennial shortage of teachers in Chinese vernacular schools from worsening, Sin Chew Daily reported. Its president Cheah Lek Aee said he understood that teachers today had to manage both teaching as well as administrative work, which can be a heavy burden to shoulder.

“We hope teachers would (remain teaching) until they retire as that would mean we have one teacher (less to replace),” he told reporters after attending an event with eight different school teachers’ associations in Perak.

Deputy Education Minister Datuk Dr Mah Hang Soon was reported to have said that Chinese vernacular schools were short of 1,010 teachers as of late last year.

Some 340 teachers were sent to the schools between December 2021 and January 2022, with an additional 151 being sent in February.

> Malaysian singer Gin Lee had denied rumours that she would soon be returning to Malaysia to get married, China Press reported.

“The main reason (for coming back) is to be with my family,” she told reporters.

Lee, who gave a press conference after her mini-concert and autograph session in Hong Kong on Sept 12, revealed that she would be making her way home once the shooting of the second season of reality TV show Stars Academy was completed.

Lee, whose real name is Jeanie Lee, hails from Johor Baru, but is currently based in Hong Kong.

She launched her career in music after gaining popularity in the reality singing competition The Voice 2 in 2010. 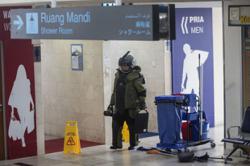