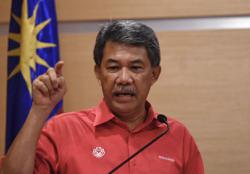 The Pulai Umno division head claimed the group was trying to weaken Umno from inside with hopes to influence the party leadership and Barisan Nasional partners in the future.

"They are also willing to accept the political frogs of ex-Umno from Bersatu for a reverse takeover of Barisan.

"These actions of certain people in Umno clearly sidelines the party with secret moves which go as far as Borneo for power and self-interest,” he said in a Facebook post on Friday (Sept 16).

Nur Jazlan who is also Johor Umno deputy liaison chief however said Gabungan Parti Sarawak (GPS) was not interested in such a coalition as they were smart and knew such a backdoor coalition would not bring about a stable government.

"These moves by the group in Umno with PAS show they are willing to betray their own party struggles to retain their power, positions and titles in Putrajaya as they know their position is now shaky.

"Lately there seems to be a lot of polemics on Muafakat Nasional, especially from PAS who still haven't come to the realisation that Umno has divorced them with 'talak tiga'.

“PAS is a 'spin master', coming out with various statements claiming there were talks between the party and certain Umno leaders which is totally false.

"As such, I would like to advise PAS to stop playing political victims as God will not hear their prayers as they were insincere,” said Nur Jazlan.