KOTA KINABALU: A local non-governmental organisation (NGO) has embarked on an ambitious project to turn water villages in Sabah into attractive tourist spots.

The Meraki Daat Sabah Initiative met with Sabah Tourism, Culture, and Environment Assistant Minister Datuk Joniston Bangkuai earlier this week to brief him on their Project Picasso which is set to begin in 2023.

The project targets to paint stilt houses in creative ways and to work with the Sabah Tourism Board to promote tourism water village destinations.

Project Picasso is Meraki Daat's flagship initiative, and it entails teaching locals about proper waste segregation, sanitation and treatment facilities as well as recycling and upcycling.

Repairing and repainting water village houses with murals based on artwork submitted from people all over the world, as well as opening up new enterprises like cafes, sales of handicrafts, and even homestays, are all part of the plan.

Certain water villages, De La Harpe said, were currently an eyesore and Meraki Daat hoped to transform them into the most talked-about destination in the region by gaining the support of both the ministry and the local councils.

“We were informed by a Universiti Putra Malaysia professor that Sabah has over 20,000 houses on stilts.

“We hope to start (Project Picasso) in the state capital seeing that it would be ideal in terms of logistics, sustainability and creating an additional tourist attraction within the city.

“Although the objectives and strategy have been set in place, it will still be subject to the cooperation of the local community identified,” she said.

De La Harpe added that the project's groundwork has already begun and that the public can stay up to date on progress and contribute in various ways, including manpower and funding, via their website merakidaat.org and social media pages.

Bangkuai, who is also Sabah Tourism Board chairman, commended the efforts by the NGO, saying Meraki Daat’s commitment bodes well for his ministry and the Sabah Tourism Board’s goal of empowering local communities through tourism.

He also said water villages would stand to benefit from the concept of community-based tourism (COBT), adding the concept should be expanded to water communities to develop new tourism products with a distinct experience.

He said this approach would aid in cleaning up and transforming water villages into thriving tourist destinations with the emphasis on cleanliness.

Particularly in the rural areas, he said, Sabah has demonstrated strong success in the area of COBT.

“Since 2014, we've noticed a rise in rural communities' interest in operating COBT,” Bangkuai said in a statement here on Thursday (Sept 8).

“Water villagers can benefit from this concept as it will teach them how to work as a team to create sustainable income for the community, and to conserve the environment,” he added.

Being a pioneer in COBT, Bangkuai shared the initial challenges faced in introducing it to the local community and the lessons learned along the way to making it as successful as it is today.

De La Harpe and Deypalan were appreciative of the advice given to them by the Assistant Minister and agreed that it was time to look into neglected water villages.

De La Harpe also briefed Bangkuai on the newly founded association and presented her dedicated team of executive members from across the nation who shared a similar passion for the ocean.

Founded and registered in July 2022, “Meraki” is a Turkish-derived Greek word with the meaning to infuse spirit, creativity, and love into something, while “Daat” is a Kadazan word for ocean. 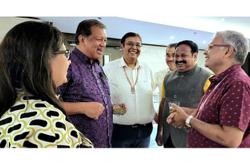 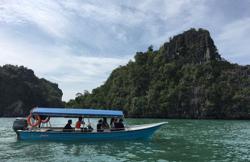