He said observations carried out by SAM together with the Friends of Nature Activists Society (Kuasa) and Pertubuhan Alam Sekitar Sejahtera Malaysia (GRASS) found that a new area had been opened to take the sand out by sea despite a stop-work order issued in January.

“This matter was widely covered in the media and even the Manjung Municipal Council ordered the dredging work to be stopped immediately, but it is still going on even without project approval signage on the site,” he told a press conference yesterday, which was also attended by Kuasa secretary Ismady Radzuan and GRASS president Mohd Yusaimi Md Yusof.

In addition to the sand mining issue, Ismady expressed concern over proposals to build a new Baitul Hilal Complex (observatory) in the Pasir Panjang recreational park and a permanent military training site in the area. — Bernama 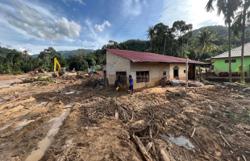