Rosmah verdict: Ex-PM's wife breaks down in court after being found guilty

KUALA LUMPUR: Datin Seri Rosmah Mansor broke down in court after she was found guilty of all three corruption charges involving a RM1.25bil hybrid solar project for 369 rural schools in Sarawak.

Asking the court to show some humanity, Rosmah said: "If it happens to me now, it can happen to you.

"I am a victim of all this. They've done this to my husband," she said while wiping away her tears.

"I am very sad with what has happened today."

She also spoke about her contributions to the country.

"I was once the first lady, and I started Permata.

"But if that is the conclusion, takpe lah," she said.

Judge Mohamed Zaini Mazlan had earlier delivered the guilty verdict shortly after dismissing Rosmah's application to recuse him from hearing or making a decision on the case.

Justice Zaini, in his brief decision, said that he has conducted a maximum evaluation in the case and found that Rosmah's defence was a bare denial and unsubstantiated.

"The prosecution has succeeded in proving its case beyond reasonable doubt.

"The accused is therefore guilty of all three charges," he said.

Rosmah's lawyer Datuk Jagjit Singh had said during sentencing mitigation that Rosmah has an unblemished character and that she has been of service to the nation. 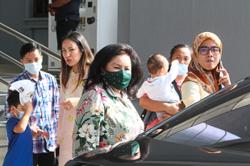