Painful loss: Chang (right) explaining to Low on the transactions that were made without her knowledge during a press conference in Ipoh. — IVAN LOH/The Star

IPOH: A 26-year-old administrator is devastated after about RM27,000, which was meant to pay for her medical treatment costs, was transferred out of her bank savings account without her knowledge.

Chang See Teng, from Menglembu here, said she had been saving up the money since she started working eight years ago.

Chang said she would go for her treatment for an illness, which she declined to reveal, once every three months.

“I am still working and my family is also helping me, but it is heartbreaking to see all my hard-earned money vanish just like that,” she said a press conference held by Ipoh Barat MCA coordinator Low Guo Nan here yesterday.

Chang said she found out that her money was gone after failing to withdraw money from an automated teller machine on July 14.

“I checked with the bank and was informed that six transactions, amounting to RM27,200, had been made on July 13, with the money having been transferred to two strangers’ Touch ‘n Go accounts.

“I was also told that my account could have possibly been hacked,” she said.

“I did not get any one-time password (OTP) text messages, which I would usually get if I made a transaction,” she said, adding that a police report has been lodged.

“What was shocking was how the large sum of money could be transferred out in a day when I have set a limit of RM5,000 for daily transactions.

“I have been so traumatised by this incident that I have even withdrawn all my savings from another bank,” she added.

Chang said she hoped that the bank could expedite its investigations and provide her with a clarification of what had happened besides retrieving her money.

“It has been a month now and I still have not heard anything from them,” she said.

Low said he would help Chang follow up on the matter with Bank Negara as soon as she gets the final report from the bank.

“We will also go to the Ombudsman for Financial Services to come up with a solution,” he said.

Low also reiterated the need for a special committee to be set up by the government to look into this issue.

“Banks need to inform their customers immediately if they notice suspicious movement of money.

“Bank Negara, the police and the Finance Ministry need to look into this matter seriously,” he added.

Low said he gets about four to five similar complaints every month.

On Wednesday, a semi-retired contractor from here had about RM3,700 transferred out of his savings account without his knowledge and consent. 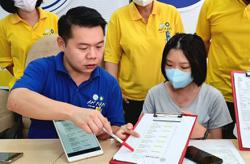