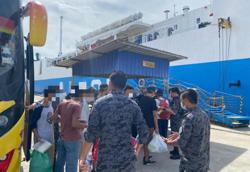 CYBERJAYA: The Immigration Department has smashed an African prostitution syndicate operating from a condominium unit here with the arrest of 10 foreign women.

Immigration director-general Datuk Seri Khairul Dzaimee Daud said the suspects, comprising seven Tanzanians and three Ugandans aged from 23 to 37, were nabbed for involvement in prostitution and other immoral activities during a raid Wednesday (Aug 17).

"Of those arrested, a Tanzanian and a Ugandan were identified as the 'mummy' or intermediaries for the prostitution activities," he said in a statement Thursday (Aug 18).

He said preliminary investigations showed that nine of the women entered Malaysia legally as tourists while one was enrolled as an international student at a language centre in the federal capital.

The syndicate targeted international students and African men, especially Nigerians, as clients, charging each customer between RM200 and RM500, he added.

The suspects have been taken to the Immigration headquarters in Putrajaya for investigation under the Anti-Trafficking in Persons and Anti-Smuggling of Migrants Act, Immigration Act, Passport Act and Immigration Regulations.

"Immigration is not ruling out the possibility of (more) prostitution syndicates catering to tourists and international students from Africa.

"Further investigations will be conducted to track down the mastermind of these prostitution activities and syndicate networks," he added. – Bernama