A new arena for Farkhan, but he’s ready for the fight 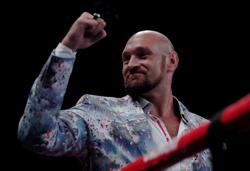 ISKANDAR PUTERI: Undefeated national boxer Muhamad Farkhan Haron (pic) is stepping into a new ring – he has been appointed as a councillor with the Iskandar Puteri City Council (MBIP) – but he has no intention of hanging up his boxing gloves.

“I am still a professional boxer. Boxing is my career. Even when I was a child, boxing was my main sport.

“I will be taking part in the Johor International Boxing Championship in December,” he said.

The 34-year-old Johor Baru-born athlete was appointed as a councillor under a special quota meant for NGOs and young professionals last Monday.

“This is a huge challenge and a responsibility for me, being given the trust by Johor Mentri Besar Datuk Onn Hafiz Ghazi.

“There is a huge difference between being a councillor and an athlete, but it is a good platform for me to bring the voices of the public, in particular the youth,” he said after Onn Hafiz had presented appointment letters to all councillors and local council chief whips at MBIP here.

Muhammad Farkhan, who has won many international titles and remains undefeated in 11 bouts, says he has a lot of work to do.

Among the most important is to lose 30kg to allow him to compete in the tournament.

He’s been working out since early this month.

“I want to get back my World Boxing Council (WBC) Asia Cruiserweight belt, which I surrendered as I had not been competing for the last two years due to Covid-19 pandemic and movement control order,” he said.

However, Muhammad Farkhan said his training would not affect his focus as a councillor to help the people in Medini Iskandar.

He added that it was hard for many traders to do business there because the area was empty by late evening.

“We will be organising a monthly drag race to take the youth away from illegal races on public roads and into a safer environment,” he said.