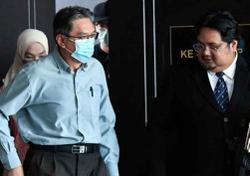 KOTA BARU: The former general manager of Air Kelantan Sdn Bhd (AKSB) has been charged with accepting a RM10,000 bribe from a company in 2015.

He was accused of accepting a bribe on Jan 22, 2015, near Maybank, Jalan Mahmood here, from Ng Tse Wei, through a United Oversea Bank (Malaysia) Bhd cheque dated Jan 21, 2015, which was credited to his Maybank Islamic account.

The money was an inducement to help Zog Technology be appointed a subcontractor to design, build, prepare, test run, and do other work related to the Merbau Chondong Water Supply Scheme Phase II, Package 1 in Machang, Kelantan.