Johor Baru South OCPD Asst Comm Raub Selamat said that the first operation was held along the Eastern Dispersal Link (EDL) Highway and the North-South Expressway on Thursday (Aug 11) at 11pm until 4am and on the wee hours of Friday (Aug 12).

“The location is a hotspot among youth to do dangerous stunts such as wheelie and riding zig-zag, which put their lives and other road users at risk.

“From the operation, police arrested three foreigners including a female pillion rider for performing stunts on a public road that is dangerous and a nuisance to other road users,” he said in a statement here on Sunday (Aug 14).

He added police issued three summonses against the suspects including for illegal modification on their motorcycles.

ACP Raub also said a 20-year-old local man was detained at Jalan Nibong 14 in Taman Daya here during another operation between 11pm on Friday and 4am on Saturday (Aug 13).

He said the area was also a known area for motorcyclists to gather and revved up their motorcycles and riding dangerously.

“The local suspect is found to be making dangerous stunts, endangering himself and other road users.

“Police also issued 14 summonses for various traffic offences and seized 11 motorcycles for further action during the second operation,” he said, adding the two cases were investigated under Section 42(1) of the Road Transport Act.

ACP Raub said police would increase their operations especially during the weekends in curbing illegal racings and remind the public to always adhere to road rules and regulations for their safety.

On Sunday, in a bid to stop illegal racing activities, Johor police pledged to conduct more operations and roadblocks throughout the state in the coming months.

“During the several phases of the movement control order in 2020 and 2021, there was a decline in illegal racing as the mat rempit were unable to carry out their activities.

“However, since the transition into the endemic phase, which saw more restrictions being lifted, they (mat rempit) have become active again and are using the highways as their racing circuit.

“As such, we have increased our operations and set up more roadblocks to curb this dangerous activity,” he told The Star. 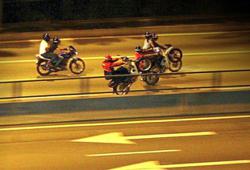