KOTA BARU: Kelantan has detected a total of 436 dengue cases so far this year, an increase of 232.82% over the 131 cases reported in the same period last year, according to a state executive councillor.

Local Government, Housing and Health Commitee chairman Dr Izani Husin said, however, the number of dengue cases for epidemiological week (EW) 31 (July 31-Aug 6) dropped to 19, down from 35 in EW 30.

"So far, there have been two deaths due to dengue while there were zero fatalities in the same period last year.

"This year, 22 dengue epidemic outbreaks have been reported in Kelantan, compared to six episodes over the same period last year," he said in a statement here on Saturday (Aug 13).

"A total of 5,025 premises were found to be aedes breeding grounds following inspections on 142,188 premises or houses.

"The Kelantan Health Department has issued 900 compound notices with proposed penalties of RM450,000 under the Destruction of Disease-Bearing Insects Act 1975," he added.

He said the maximum compound for each summons was a non-appealable RM500.

A total of 99 notices under Section 8 have also been issued to order clean-up works and destruction of potential aedes breeding grounds.– Bernama 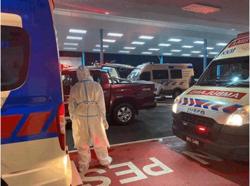