Najib first asked how much progress was made on the LCS project during Pakatan's 22 months in power.

"Is it true that we had 55% progress in three-and-a-half-years when construction began in January 2015 to May 2018 and almost zero progress from May 2018 until today?" Najib asked in a Facebook post on Saturday (Aug 13).

Second he asked what did Pakatan do to solve LCS project delays when they took office in May 2018.

"Even if you had delivered (the LCS project) in April 2019, would a few months delay be acceptable if you had tried to solve the problems?" he asked.

Najib's third question was why the former Pakatan government kept mum over the issue when the April 2019 delivery deadline was missed.

"Why just before GE15, you coordinated to make a major issue on late delivery of a project that was stopped during your time in government?" the Pekan MP asked.

He was responding to DAP's Lim Kit Siang, who said on Saturday (Aug 13) that the Pekan MP should take responsibility for the LCS scandal.

In Najib's fourth question, he pointed out that Boustead Holdings, which is owned by the Armed Forces Fund Board (LTAT), registered losses in 2018 and 2019, and asked what Pakatan did to mitigate this.

"How much funds or loan guarantees did the Pakatan government provide to Boustead to ensure this national strategic contract is resumed and progressing?" Najib questioned.

In Najib's fifth question, he said the LCS project was not missing as five ships were being built simultaneously since the contract was signed in July 2014. He compared this to the RM6.34bil Penang tunnel project that was signed in Nov 2013.

"I can show photos of five out of six ships in various stages of construction, but can you show me photos of the construction progress of the four main roads and the tunnel?

"Does 'uncle' know the difference between a late project versus a completely dead or stopped project like the Penang Tunnel project by your son?" Najib questioned, referring to former Penang chief minister Lim Guan Eng.

ALSO READ: LCS scandal may be a non-issue in GE15, say analysts

In his last question, Najib asked which company would be able to undertake the LCS project if Boustead Holdings was not a suitable company.

He said the aim of the LCS project was to enable navy ships to be built and maintained by local companies.

"Should Malaysia just be a customer or should we have national capabilities to design, build and maintain ships ourselves?

"Six simple and very fair questions. Surely 'uncle' and Pakatan will not ignore this?" Najib asked.

Earlier on Saturday (Aug 13), Lim said Najib should stop blaming others on the LCS project, and stressed that the former Pakatan administration cannot be involved in the scandal as the conception, negotiation and signing of the contract took place during Najib's time as premier.

Lim reiterated questions raised by former defence minister Mohamad Sabu and his then deputy Liew Chin Tong, who asked whether Najib had planned from the beginning for the LCS project to help pay off bad debts from the failed New Generation Patrol Project (NGPV).

Lim said Najib was deeply involved in the New Generation Patrol Vessel (NGPV) project, being the defence minister from 1990 to 1995, as well as from 2000 to 2008

"Instead of accepting responsibility for the NGPV and LCS scandals, Najib is trying to divert attention from himself by pointing to the past and to the future – blaming the fourth prime minister who resigned in 2003 and the 22-month Pakatan government from May 2018 to Feb 2020," said Lim.

Last week, the Public Accounts Committee (PAC) reported that a total of RM400mil was used to repay previous debts incurred under the NGPV project.

The NGPV is a project for the construction of 27 patrol vessels which received Cabinet approval in 1993.

Where is Pakatan’s hunger for power? 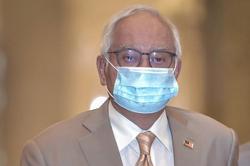