The 60th anniversary Mani Vizha (equivalent to Diamond Anniversary) celebration was slated for 2020 but it had to be postponed due to the Covid-19 pandemic.

The celebration will be held this year on Nov 20 as a grand festival with literary events and competitions.

The festival will feature competitions on classical poetry, modern poetry, short stories and essay writing, among others.

The complete itinerary and participation details will be announced soon, he confirmed.

> A man in Delhi who was annoyed by kids playing loudly outside his friend’s house shot them with a gun, the daily also reported.

The man who was identified as Hamzah, 22, was attending his friend’s birthday party when a group of kids was playing outside near the house.

Annoyed by the noise, Hamzah retrieved his gun and threatened the kids with it.

This led to an argument which escalated into a fight and Hamzah shot at the kids, injuring three of them.

The kids have been hospitalised for treatment. Hamzah has been arrested. 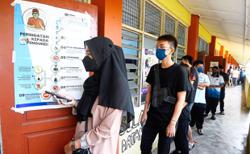