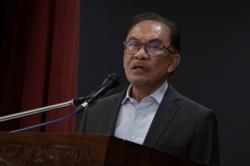 "He's just a man. We're all imperfect human beings. We should only be fearful of God," the incumbent Tambun MP, who is also known as Peja, told The Star on Friday (Aug 12) evening.

The Parti Pribumi Bersatu Malaysia deputy president also said only MPs who have not carried out their duties should be fearful of being punished by voters during GE15.

He also said Malaysia practises parliamentary democracy and Anwar, the current Port Dickson MP, is free to contest wherever he wishes.

"I will defend his and every Malaysian's rights to this," he said.

He was responding to PKR central leadership council member Siti Aishah Shaik Ismail, who said Ahmad Faizal could have cause for concern if Anwar contests in Tambun in GE15.

"The question is simple – why is Peja (Ahmad Faizal) worried if he had cared for the Tambun community?" Siti Aishah said in a statement on Friday.

She was replying to Ahmad Faizal, who said he was curious why Anwar was considering another parliamentary constituency since he is the Port Dickson MP.

"Perhaps, they (PKR) believe that Port Dickson has developed and no longer has people who need help.

"Or maybe Anwar is worried about being rejected in Port Dickson and believes that it's safer to contest elsewhere," said Ahmad Faizal.

Anwar had said on Thursday (Aug 11) that he was open to contesting in Tambun in GE15.

There was talk that Tambun PKR chief Muhamad Arafat Varisai Mahamad could make way for Anwar to contest and this was agreed during the branch's annual general meeting.