Enforcement officers found some 30,000kg of cooking oil in the tanker lorry which was parked inside the premises.

SEREMBAN: Enforcement officers have seized 60,000kg of subsidised cooking oil from a premise located in an industrial area in Senawang near here.

State Domestic Trade and Consumer Affairs enforcement chief Abd Muis Samsudin said the raid was part of an ongoing exercise to ensure there was no disruption in the supply of 1kg subsidised cooking oil sold in polybags in Negri Sembilan.

"When my men entered the premises, they saw a tanker with some 30,000kg of cooking oil in its tank.

"We believe the oil was to be transferred into smaller storage tanks at the premises," he said.

Upon further inspection, the team found another 30,000kg of subsdised cooking oil stored in the building.

Muis said when his officers checked the company’s stock book, it was stated that the amount of cooking oil stored at the premises was only 5,350kg.

The company, he said, would be probed under the Control of Supplies Act 1961 for, among others, having more than the allowed quantity of cooking oil stored in its premises than what was stated in its licence.

"It will also be investigated for failing to maintain its stock book to store subsidised goods and if it was involved in any wrongdoing in relation to the distribution of 1kg subsidised cooking oil," he said, adding that it was imperative for all businesses to strictly comply with the relevant provisions in the law.

He also appealed to the public to report to the department if they had information on such activities by contacting its call centre at 1 800 886 800, enforcement command centre at 03 8882 6088/6245 or email it to e-aduan@kpdnhep.gov.my. 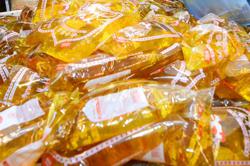