KOTA KINABALU: All Umno divisions in Sabah have been asked to propose the names of five candidates for the coming 15th General Election (GE15).

Sabah Umno chief Datuk Seri Bung Moktar Radin said the list of candidate names must be given to the state liaison committee immediately for early screening.

“It doesn’t matter if the names are of people with positions in the party or not because what matters more is that they are capable of doing the job once elected,” he said after chairing a special meeting on Tuesday night.

Bung said the concept used to select the candidates was “wali”, which refers to the person being able to win, is acceptable (by the people) and likeable.

Bung also urged Umno division leaders to update their electoral list and to identify new and young voters in their own areas.

“Make sure the electoral list in your areas is updated.

“A dry run simulation should be held to prepare for GE15,” Bung added.

He reminded all party leaders and members to work together and support each other as well as to take part in Umno programmes that would foster better unity and understanding among themselves. 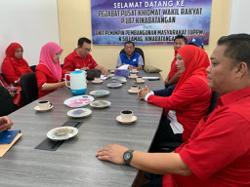