PUTRAJAYA: There is a possibility that Datuk Seri Najib Razak may change his line-up of defence lawyers in the SRC International Sdn Bhd appeal again.

During a case management on Wednesday (Aug 10) for Najib's application to adduce fresh evidence in the hearing, his counsel repeated that they were not ready to proceed with the main appeal as it involves heavy issues.

They said they needed time to prepare as this was "no ordinary appeal".

It was learned that the counsel indicated they had no choice but to discharge themselves from representing Najib if the court insisted on proceeding with the main appeal on Aug 15.

The Federal Court had fixed that date to start hearing the appeal, with the former premier having applied to amend his motion for fresh evidence and followed by the motion itself.

"If the motion is dismissed, the court will proceed with the main appeal proper.

"Counsel for the applicant will again make an oral application before the court to adjourn the main appeal after conclusion of arguments for motion for fresh evidence, and leave it to the court to decide," said a source.

On July 25, Najib had discharged Messrs Shafee & Co and took on Messrs Zaid Ibrahim Suflan TH Liew & Partners (ZIST) to represent him in his final appeal at the apex court.

The Federal Court was informed in a letter dated July 26 from ZIST that senior lawyer Hisyam Teh Poh Teik of Messrs Hisyam Teh will be leading the appeal while Liew Teck Huat and Rueben Mathiaravanam, both from ZIST, will be co-counsel.

Najib's final appeal at the Federal Court will be heard from Aug 15-19 and Aug 23-26. The previous date of Aug 22 has been vacated by the court. 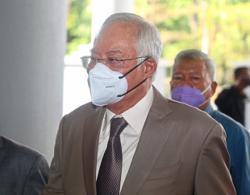