SUBANG JAYA: A tuition teacher died while she was being rushed to hospital by her family.

The 44-year-old woman had attempted to take her own life at her home here on Saturday (Aug 6).

Subang Jaya OCPD Asst Comm Abd Khalid Othman said they received information about the incident at around 11.51pm on Saturday.

"We were informed that the woman was still breathing when her family found her and rushed her to hospital. She died on the way.

"The deceased has been identified as a 44-year-old tuition teacher who lived with her husband and children," he said in a statement on Monday (Aug 8).

He said initial investigations revealed the deceased had been experiencing emotional stress and was receiving treatment at a private clinic at Petaling Jaya.

"We conducted an examination on the scene, as well as a physical examination of the deceased and found no evidence of criminal elements.

"We have classified the case as sudden death (SDR)," he said, adding that a post mortem was conducted at the Universiti Malaya Medical Centre.

He added that checks revealed no report had been lodged by the deceased on allegations that she was a victim of cyber bullying.

A media portal had reported that a mother of three was believed to have taken her own life after being cyber-bullied on social media.

The deceased's TikTok account was believed to have had a barrage of hateful comments over her appearance and her handbag collections. 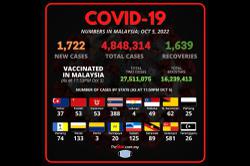