GEORGE TOWN: Penang has kicked off its National Month and Jalur Gemilang waving campaign ahead of National Day on Aug 31 this year.

Chief Minister Chow Kon Yeow, who officiated the campaign, urged the people to love the state and country.

"After two years of not being able to celebrate the National Month due to Covid-19, we now have the 'freedom' to do so this year.

"In line with the state's LovePenang campaign that was launched, this National Month is a good platform to realise the mission and objective of this campaign.

"The National Month plays an important role to convey clear messages and instill the spirit of patriotism among us.

"Regardless of where we are, the pride of waving the national flag should be practised.

"Jalur Gemilang is a symbol of our country to raise patriotism spirit among the people," he said after launching the event at Straits Quay on Monday (Aug 8).

Also present were state excos and heads of various government and uniformed agencies.

The state Information Department also headed a convoy comprising various kinds of vehicles around the area as a symbolic gimmick to the launch after they were flagged off by Chow on stage. 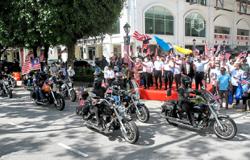