PUTRAJAYA: A new Malay-Muslim movement called “Gerakan Tanah Air” is in the works to take on Umno in the next general election.

The coalition is the brainchild of Tun Dr Mahathir Mohamad, the former prime minister who was also behind the formation of Parti Pribumi Bersatu Malaysia (Bersatu) as well as Parti Pejuang Tanah Air (Pejuang).

“Our members will be exclusively Malay and this is not because we are racist. It is to take on another Malay party – Umno – during the next general election,” said the Pejuang chairman.

The coalition will consist of four political parties, NGOs, academicians and individuals.

Dr Mahathir said a Malay movement was needed to get the backing of Malays, and he called upon Malays who were doubtful of their future to support it.

Dr Mahathir, who will also be Gerakan Tanah Air chairman, said the rights of the Malays “would be strengthened” with the new movement.

“A majority of those in poverty are Malays. Due to this, they are facing various problems which include having to sell their lands,” he told a press conference at the Perdana Leadership Foundation here yesterday.

While pointing out that the gap between the rich and the poor could create tensions and instability, Dr Mahathir also raised the racial bogeyman.

“This is not good for political stability, which can cause unwanted issues, such as clashes, to occur,” he said.

The coalition plans to field candidates in 120 seats, with its main focus on Malay-majority seats in the peninsula.

“We will focus on the peninsula first. Although we do have a small movement in Sabah, there are no plans to contest there yet,” he said.

He said no name had been proposed yet for the post of prime minister.

Dr Mahathir added that the movement had a strong chance of winning multi-cornered contests in Malay-majority seats.

“Most Malaysians oppose corruption, so we stand a good chance because people will want change,” he said in reference to seats contested by Umno and Bersatu.

He asaid the movement would submit an application to the Registrar of Societies (ROS) soon.

“If ROS can be lenient towards Umno and allow it to postpone party polls, we hope it can also be lenient in our case,” said Dr Mahathir. 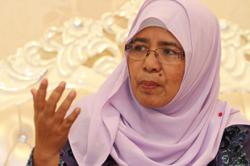