In a parliamentary written reply dated Aug 3, he said the Penang police had opened disciplinary investigation papers against the two traffic policemen for escorting the MP’s son in George Town.

“The police conducted an investigation into the incident after a 20-second video went viral on social media since May 7.

“Action has been taken against the two traffic policemen under Rule 36 of the Public Officers (Conduct and Discipline) Regulations 1993,” Hamzah said.

He was responding to a question by Steven Sim (PH-Bukit Mertajam) on the status of the investigation. 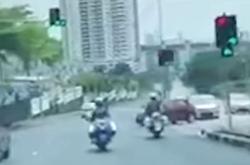