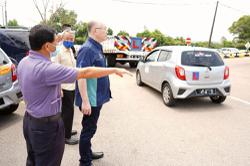 "The final approval for the proposal to construct a new airport in Tioman Islands will only be considered after the NASP report is completed, as well as compliance to all the terms by government agencies, such as stipulated in those technical reports," said Dr Wee.

The NASP report that started earlier March this year, said Dr Wee, would take 18 months to complete and it would cover all 42 airports across the country.

"It (NASP report) covers the construction of new airports and it will also assess whether the proposals of new projects are viable or not," added Dr Wee.

"The National Physical Planning Committee (MPFN) also decided that this proposal has to be brought up again to be considered by the committee," said Dr Wee during Oral Question Time in Parliament on Wednesday (Aug 3).

Dr Wee also said at present, no approval was given by the ministry on the construction of an aerodrome in the proposed new airport in the Tioman Islands.

He was responding to Anthony Loke (PH-Seremban), who asked whether the proposed new airport in Tioman Islands was approved by Putrajaya.

Commenting further, Dr Wee said the construction of the aerodrome in the proposed new airport in Tioman Islands would require approval by the Transport Ministry, then only the developer of the project can apply for an aerodrome operating license (AOL).

"To get the AOL, they also need to go through the Malaysian Aviation Commission (Mavcom), and the Civil Aviation Authority of Malaysia (CAAM)," added Dr Wee.

The proposed new airport in Tioman Islands was approved by the Pahang state government in October 2019 and it was currently being studied by several technical reports.

The project in Tioman Islands was announced in June 2018 and it would reportedly cost up to RM1.2bil.

Meanwhile, Dr Wee said the proposed new Kuantan International Airport was in the process of meeting all the requirements by the ministry.

"The MPFN meeting last year approved in principle the new Kuantan International Airport and it has to be approved by the ministry and AOL.

"So, it hasn't obtained the final approval, but it is in the process of completing all the requirements as stipulated," said Dr Wee.

On July 12, Pahang Mentri Besar Datuk Seri Wan Rosdy Wan Ismail said the proposed new Kuantan International Airport, which would be part of the Pahang Aerospace City, was expected to be operational in 2026.