Environmentalists: Save the forests for the jumbos 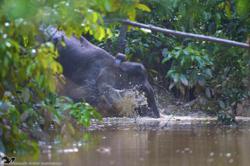 KOTA KINABALU: The best way to protect wildlife, including the endangered pygmy elephants in the Kinabatangan area, is by preserving the remaining forests and abandoning the Sukau bridge project, say environmentalists.

This comes after a study of GPS collared data from 14 elephants showed the animals spent a significant time in unprotected forests.

Senior lecturer at Universiti Malaysia Sabah and founder of the NGO Seratu Aatai Dr Nurzhafarina Othman said in Lower Kinabatangan, 49sq km of unprotected forest on state land and various land titles were at risk of being converted.

“Protecting these forests is an essential and efficient way to secure key elephant habitat since all collared jumbos were using these forest fragments in their entire range,” she said.

In the study, which was published in the journal Scientific Reports, scientists used GPS collared data for the elephants, and the developed land use and land cover data to assess how the animals used the plantation-dominated landscape in the Kinabatangan floodplain.

Using this data, they identified the distribution and hotspots of 11 females and three males living in the Lower Kinabatangan from 2010 to 2020.

Nurzhafarina said on average, collared elephants spend 24% of the time in unprotected forests within the hotspots.

She said in fact, five females had a large proportion of their areas outside their hotspots in unprotected forests, spending substantial periods of their time – 33% to 61% – within these threatened areas.

“It is therefore critical for the survival of the elephant population in Kinabatangan that these unprotected forests are preserved and acquire protection status as soon as possible,” she said.

Dr Nicola Abram from the NGO – Forever Sabah – said protecting all remaining forests and abandoning plans for a public road through the Kinabatangan elephant range was of prime importance to safeguard this highly threatened population.

She said under the study, scientists estimated the proportion of time spent within differing land use categories in the elephant’s hotspots and compared this with their known ranges.

Other data looked at were time spent by elephants in different estates to identify where better management strategies were needed to improve habitat permeability and reduce human-elephant conflicts.

Abram said identifying the location of hotspots or areas most frequented by the jumbos was essential in designing appropriate management practices in collaboration with land users and identifying the best location for elephant corridors.

Danau Girang Field Centre director Prof Benoit Goossens, who is from Cardiff University, said another significant issue faced by these elephants was the threat from the controversial Sukau bridge and roads or highway set out in the Sabah Structure Plan.

“For Kinabatangan, creating a public highway will cut the elephant population range into two parts. All collared elephants use this area as it is a key bottleneck and the only alternative option to pass around Sukau village,” he said.

“Our analyses suggest that if the road or highway (and the bridge) goes ahead, it will have a significant impact on the elephants’ behaviour,” he said.