Joachim showing his certificate after receiving his scholarship offer letter.

He said with the state investing in education and assisting those who were eligible to further their studies after secondary education, it was also their hope that these recipients would in turn contribute back to Sabah.

"It is also part of the deal, that those who accept our scholarship should come back and serve the nation once they’ve completed their tertiary education," he said.

Hajiji said this to reporters after presenting scholarships to a total of 40 SPM top students through the Sabah Foundation (Yayasan Sabah) here, Tuesday (July 26).

Earlier during his opening speech, he said the state government needs a multitude of human capital to spur development in the state.

He said developments in Sabah were not only focused on selected industries but many, including digitalisation.

"That’s why the state is focused on building human capital and making education among our main core focuses of development," Hajiji said.

During the event, some of the recipients advised applicants of scholarships to continue trying if they failed to get any offers for the first round.

"Don’t give up easily and expand your search. There are so many programmes organised by the government to help us further our studies and you just have to be patient," said Koh Ye Shyn, former Kota Kinabalu High School student.

The 10A SPM achiever who wishes to become an environmental scientist one day said there are bound to be other opportunities out there, and failing to get one scholarship now should not stop anyone from trying again.

She said coming from a B40 family, this scholarship would definitely help ease her parents' burdens.

The 17-year-old only child to a housewife and graphic designer said she hopes to further her studies overseas after completing her A-levels at Kolej Yayasan UEM in Selangor,which she is expected to enroll in come Aug 22 next month.

Allen Martin Jumin, 18, of SM St Michael’s in Penampang who aspires to become a doctor, said he dedicates his 10As in SPM to his late father who passed away in 2020.

The second of three siblings thanked the state government for providing various platforms for students like him to further their education and get assistants and scholarships.

His mother, Bonica Paun who is a housewife, praised her son whom she said had always done well in school and knew what he wanted in life.

"For applicants who have yet to succeed in getting scholarships, don’t stop searching and applying because the opportunities are wide and vast," she said.

Joachim Pavanaris of SMK Arshad, Kota Belud, on the other hand said for those who cannot afford to further their education yet, due to financial or whatever reasons, can opt to work first.

The 9A SPM achiever who wishes to be a teacher or lecturer said while education was important, it was also necessary for one to think rationally because each person too has their family duties and responsibilities to carry.

He said if scholarships were not available, they could try working and saving money first before continuing their tertiary education.

"There are so many ways to go about this. Don’t stop just because you find yourself in a tough situation now," Joachim said.

When asked whether these recipients will return to the country to serve the nation once they’ve completed their studies, they all agreed that this was part of their plan. 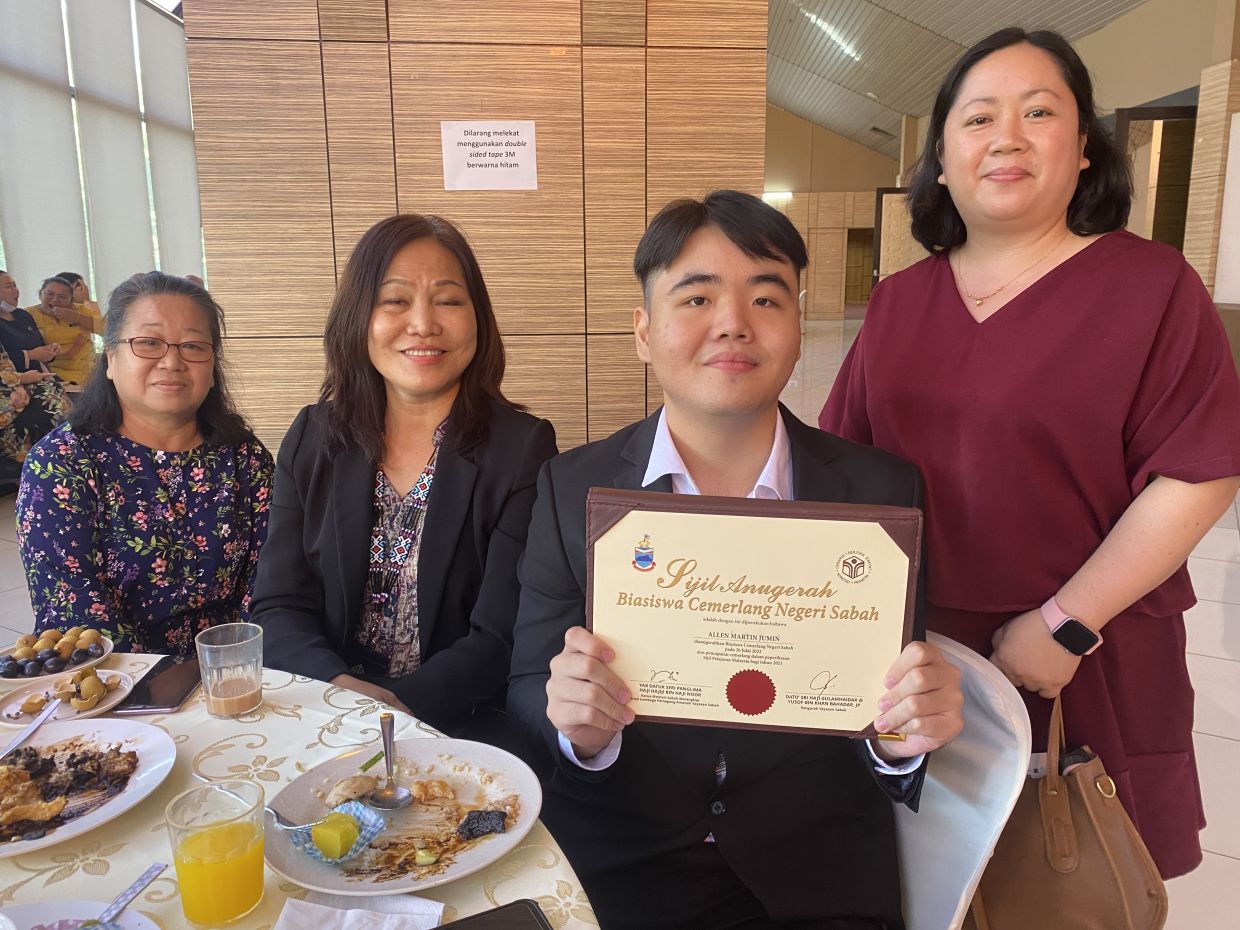 Joachim showing his certificate after receiving his scholarship offer letter.

Koh and her mother Chung Vui Lee at the event.

(from right) Bonica, Allen and his aunts at the event.