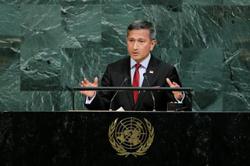 PETALING JAYA: Industry groups have questioned the report putting Malaysia on Tier 3 in the US State Department’s Trafficking in Persons (TIP) Report for two consecutive years despite much improvement on the ground.

They also questioned the credibility of the parties behind the report, the basis, methods of assessment and how evidence was gathered before the conclusion was made.

“Employers have been doing their part in compliance after the Workers’ Minimum Standards of Housing and Amenities (Amendment) Act 2019 (Act 446) came into force in September 2020.

“More than 80% of SME employers who hire foreign workers have embarked on changes and have since improved, especially in their wages and accommodation.

“I won’t say it’s all good, as isolated cases of negligence are still there.

“But the overall improvement should have been factored into the report,” he said yesterday.

Countries placed in Tier 3 can be penalised with sanctions and limited access to the United States, which is still Malaysia’s third largest trade partner after China and Singapore.

Exports from Malaysia into the United States include electrical and electronic products, rubber products, machinery, equipment and parts, and optical and scientific equipment.

Direct US investment in Malaysia was US$13.5bil (RM60.10bil) in 2020.“Employers are aware that without improving, they cannot hire foreign workers,” Ding said.

“Who wants that kind of trouble when we do not have enough workers?”

He said the government had taken the matter seriously and embarked on enforcement to get companies to improve.

“Our Labour Department in all states did checks and helped businesses change. So it’s not fair and not right to say we have done nothing to change or improve,” he said.

Ding also said the report “did not reflect the reality on the ground”, as there were no details on how they gauge changes and what standards they used to come up with such a conclusion on Malaysia.

He has called on the government to be “more vocal” about Malaysia’s improvement on the global scale by putting up relevant publications in the media as well as reminding employers of their responsibilities.

He also called on SMEs to stay informed and maintain good relationships with government agencies.

Weighing in, Federation of Malaysian Manufacturers president Tan Sri Soh Thian Lai said the government’s seriousness and action in the matter “must be acknowledged”.

“Apart from launching the National Action Plan on Forced Labour last year, specialised task forces have been set up to address areas of concern and non-compliance within specific industry sectors, especially those that are labour-intensive and have a significant number of migrant employees.

“The joint task forces comprise both the public and private sector and trade associations,” he said, adding that efforts were underway to reform some current practices to ensure any possible element of forced labour would be addressed and eliminated.

While exporting companies are subject to various external standards and rules, Soh said labour-extensive local companies were bound by the amended Act 446 and the Employment Act, which had been “aggressively enforced” to prevent any form of labour abuse.

Malaysian Consortium of Mid-Tier Companies president Callum Chen said his plastic manufacturing business, which exports 85% of its products mainly to the United States, faced more stringent client audits in recent years due to the TIP Report.

“So it’s more difficult to do business now,” he said, adding that companies that fulfilled all audit requirements would be fine.

Pointing out that mid-tier and exporting companies often face such audits with different industry standards monthly or every two months, Chen said the report might not reflect the reality on the ground, as companies are aware of the audits and standards to avoid sanctions.

When contacted, Kossan Rubber Industries Bhd group managing director and CEO Tan Sri Lim Kuang Sia said the recruitment of his foreign workers was based on a zero-cost policy.

“It means we bear all the costs and workers don’t have to pay,” he said.

National Association of Human Resources Malaysia president Zarina Ismail said calls had been made for the government and employers to implement zero-cost hiring to address debt bondage, possible exploitation and forced labour of foreign workers.

“While remaining in Tier 3 is unfortunate, we also need to ask our employers if they are ready to do zero-cost hiring, as there are still workers whose salaries are deducted to pay for debts,” she said.

Malaysia remains at bottom tier in US human trafficking report