The state assembly Speaker said four Bills will be tabled at the second meeting of the third term of the 16th Sabah State Assembly, but he did not elaborate further on which bills.

"The standard operating procedures (SOPs) to prevent the spread of Covid-19, such as wearing face masks and self-tests, are still in force during this sitting,” he said at a press conference at the Sabah State Assembly Building in Likas, here Thursday (July 14).

Kadzim said during this sitting, the state assembly will allow the presence of observers, therefore those who were interested are required to make an application to the assembly secretariat.

"Schools and non-governmental organisations can apply, as well as Yang Berhormat (assemblymen) who want to bring their observers. However, the allocation for number and time slots is limited, as we are still subject to the SOPs set,” he said.

Asked about the latest position of state assemblymen at the sitting, he confirmed that Kukusan assemblyman Rina Jainal, who left Parti Warisan on June 5, will sit in the government block, as she had declared herself government-friendly.

He also said that Segama assemblyman, Datuk Mohamaddin Ketapi, who is also Lahad Datu MP, who quit Bersatu on June 28, remained in the government block because he was still a government-friendly people's representative. - Bernama 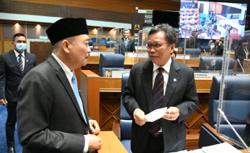