Fahmi said this came following a special meeting on Wednesday (July 6) night to discuss issues pertaining to the party polls and the upcoming PKR national congress this month.

Among the issues raised during the meeting, said Fahmi, were complaints on the party polls, and a full briefing by a forensic audit firm on the Adil app used for online voting.

"The forensic audit firm acknowledges weaknesses in the implementation of the system.

"The central leadership committee accepts the explanation by the forensic audit firm on appropriate steps to address the weaknesses.

Earlier, Fahmi said among the other issues discussed during the special meeting was the 1,800 complaints lodged during the party polls.

"The central leadership committee guarantees that the party polls committee will resolve these complaints and give a written response to every complainant," he said, adding that issues pertaining to discipline will be referred to the disciplinary board.

Fahmi also said the PKR Wanita and Youth congress would proceed on July 15, 16 and 17 at the Ideal Convention Centre (IDCC) in Shah Alam.

"Every delegate, including those from Sabah and Sarawak, will be physically present.

"The upcoming PKR national congress will witness the new leadership taking the reins of the party leadership, further outlining the party's policy and direction to face the 15th General Election," said Fahmi.

The recent PKR elections were held in a hybrid manner, which is a combination of online and physical voting.

The PKR's central leadership committee has received over 1,800 complaints since the official party polls results were announced on May 30. 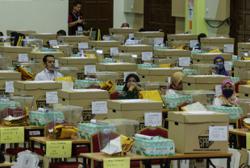