265 PLUSRonda patrol teams to be mobilised during Hari Raya Haji

KUALA LUMPUR: PLUS Malaysia Berhad (PLUS) will mobilise 265 PLUSRonda patrol teams for a higher patrolling frequency during the Hari Raya Aidiladha celebration, primarily at critical stretches along the highway.

Its chief operating officer (COO) Datuk Zakaria Ahmad Zabidi said PLUS would also activate the contra flow and open up emergency lanes at critical stretches as additional lanes with the assistance of the Royal Malaysia Police (PDRM).

"Highway users are advised to abide by the instructions given through the signages placed at the contra flow and the opening of the emergency lane designated locations.

"PLUS will also temporarily suspend all roadworks and lane closures on the highway from July 8 to 12 to facilitate smoother traffic flow,” he said in a statement.

The statement also said that during the Aidiladha celebrations, all public facilities such as surau and toilets at rest and service areas (R&R) will be available to users 24 hours a day.

Road users are also encouraged to download the PLUS App to better plan their journey as it also offers live CCTV feeds of critical locations along the highway and a toll fare calculator.

The app can be downloaded for free on the Google Play Store or Apple App Store. - Bernama 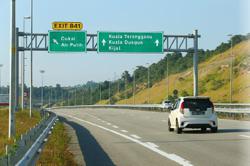