KOTA KINABALU: Philippines AirAsia is looking at Sandakan as a possible regional hub as part of its expansion plans.

In welcoming this plan, he said it would benefit both Malaysia and the Philippines.

It would also be in line with the Sabah Maju Jaya (SMJ) Halatuju plan, which calls for Sandakan airport to be upgraded to the international level, he added.

“The direct routes to Kota Kinabalu that (Philippines AirAsia) plans to study will connect Puerto Princesa and Davao there.

“A connection between Zamboanga and Sandakan is also on the list of potential routes.

“Tawau, being a gateway to Semporna, could also serve as an operational hub. So, whether it's Sandakan or Tawau, we'll let them study the viability," he said.

On Tuesday (July 5), Jafry attended a press conference here on a collaboration between Philippines AirAsia and Sabah Tourism Board (STB), with a familiarisation trip to Sabah organised for the Philippines media.

On the strategic partnership between STB and AirAsia, Jafry said the board was finalising a collaborative campaign to encourage Filipinos to visit Kota Kinabalu.

“We want to sustain the travel momentum and for Sabah, we are not just looking at beaches but ecotourism and agrotourism which are educational.

“We are looking into opening a new (route) to Sandakan, which has one of the highest Filipino populations in Sabah, as part of our expansion,” he said.

STB chief executive officer Noredah Othman added that Manila can be a gateway to attract international visitors to Sabah.

She said Sabah and the Philippines each had unique qualities that should be enjoyed by visitors. 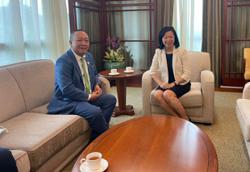