Cruise ships to be a regular sight in Penang 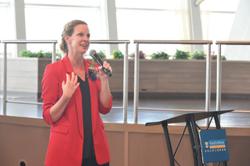 Brighter days: Penang is confident of a tourism rebound with the arrival of ‘Genting Dream’. It is the second cruise ship to dock in three days. — Filepic

GEORGE TOWN: Penang is primed for a tourism rebound with the arrival of a second cruise ship at the Swettenham Pier Cruise Terminal (SPCT) today, a sight not seen for more than two years.Penang Port Commission chairman Datuk Tan Teik Cheng said Resorts World Cruises’ Genting Dream, carrying 3,325 tourists and 1,700 crew members, would call at Penang at 8am.

Last Saturday, Royal Caribbean’s Spectrum of the Seas docked at SPCT after two years of Covid-19 restrictions that prevented the arrival of large cruise ships to Malaysia.

“With the efforts of the Penang Port Commission and Penang Port Sdn Bhd, Genting Dream Cruise, will bring more than 5,000 visitors to Penang.

“Following this, the cruise ship will sail from Singapore to Penang every Tuesday,” said Tan, who described this as another great news for Penangites.

“I realised that after Spectrum of the Seas arrived in Penang last Saturday, the response from locals was encouraging.

“The vitality brought by tourism is an important factor in generating income for businesses,” he said, adding that the arrangement of all aspects of the port, especially the transportation and arrival of passengers, had been smooth.

Tan also urged traders to seize the opportunity as more international cruises will be visiting Penang.

“I firmly believe that there will be more international cruise ships arriving in Penang in the future.

“Tourism can play an important role in the economic restructuring of Penang after the pandemic. The cruise industry will have a significant contribution,” he said.

He added that since the expansion of SPCT, the berthing area was now bigger by about 30%.

Besides the solid deck wharf being extended 220m towards the north of the terminal from 400m to 620m, the breasting and mooring dolphin had also increased by 50m and 68m, respectively.

“Although the cruise ships will arrive at different times, it will definitely be a spectacular sight and a major breakthrough for SPCT,” he said.

Genting Dream cruises will call at Penang from Singapore every Tuesday, while Spectrum of the Seas will call on Tuesdays and Saturdays every week in July. 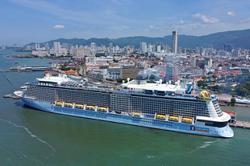 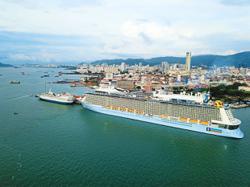