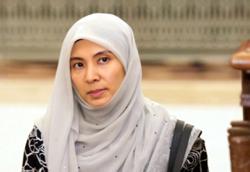 GEORGE TOWN: Penang PKR is looking to field fresh and young faces as candidates for the party in the 15th general election (GE15).

State PKR leadership council chairman Datuk Muhammad Bakhtiar Wan Chik said he had interviewed some of the eligible candidates and their name would be submitted to PKR president Datuk Seri Anwar Ibrahim for approval.

"We are bringing some young blood but of course those who are capable and can work for the people," he told reporters during a durian eating party with PKR Penang Island City Council (MBPP) councillors and media at Sungai Ara on Saturday (July 2).

Muhammad Bakhtiar however said that PKR fielding younger candidates didn't mean they the party still did not need those with experience.

He said the party might do some changes in terms of candidates in the GE15, however the list of the candidates could change a bit as there were other qualified candidates that had not been interviewed by the state party.

When asked where these young and fresh faces were going to contest, the Balik Pulau MP said seats like Telok Bahang, Sungai Acheh, Seberang Jaya and Nibong Tebal would be contested by these young new faces.

He said the party was also looking for some capable women candidates to represent the party in GE15 so that more women representatives in the state PKR line-up.

He said he himself and former PKR vice-president Nurul Izzah Anwar are working closely to identify qualified woman candidates to contest in GE15.

On his future as candidate in GE15, the former MBPP councillor was coy when asked whether he would contest in the state constituency and not to defend his MP post.

"There are a lot of people who ask me to become adun (state assemblyman), but if you ask me, I will defend my parliamentary seat, I am sure there will be others from PKR who can contest in state constituencies and become exco or adun," he said.

It has been speculated that Muhammad Bakhtiar had been slated to be the next deputy chief minister I and his name had been put forward by the party leadership to the Pakatan Harapan presidential council.