PETALING JAYA: There will be an expected shortage of medical officers at Hospital Kuala Lumpur (HKL) due to the exit of junior doctors from July 18.

An internal letter tweeted by Hartal Doktor Kontrak (HDK) said HKL's senior management found out that there would be a shortage of medical officers at HKL and Tunku Azizah Hospital following the exit of junior medical officers (floaters) from July 18.

The internal letter, signed by HKL's deputy director Dr Marina Abdullah Sani, said a meeting would be held at the hospital's auditorium on Friday (July 1) afternoon with all medical staff to find a solution.

HDK said the letter showed that the doctor shortage crisis could only worsen, something they warned about a long time ago.

"They barely had enough doctors to cater to HKL's patient load, and now this," tweeted HDK.

There could be a possible stopgap measure to handle the crisis by administrative doctors performing clinical tasks by seeing patients.

HDK has been campaigning for an end to the "two-tier system" between permanent doctors and those on contract at government hospitals.

This was due to contract staff not being eligible for post-graduate scholarships to specialise and also not guaranteed permanent posts after contract expiry.

Stop the bullying and abuse of trainee doctors in Malaysia 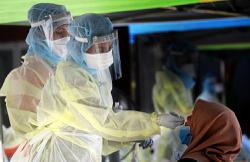