SIBU: The state government is embarking on an ambitious plan to develop this town possibly into "another Amsterdam".

Premier Tan Sri Abang Johari Tun Openg said the government had come up with a new approach in tackling the flood prone area of Bukit Assek by constructing waterways.

"We in the GPS (Gabungan Parti Sarawak) are in the right direction and Sibu will be developed accordingly.

“It is a pity as Bukit Assek is waterlogged and the people of Sibu are frequently hit by floods.

“We had a meeting today (July 1). We discussed a new approach to overcome the floods. If it is done according to our plan, maybe Sibu will be like Amsterdam with its canals," he said at the launching of the Azman Hashim community sports centre on Friday night (July 1).

The Premier also expressed his appreciation to Tan Sri Azman Hashim, executive chairman of Amcorp Group Berhad, for the Group's contribution of the stadium, which is located in Sibujaya.

He was optimistic that with the centre, more talented sportsmen and women would be produced to bring up the good name of the state.

"Sarawak has a lot of potential in sports. I believe with this facility, we can increase the number of athletes not only of national standard, but also world class standard," he said.

Abang Johari also hoped that Sarawak can be the overall champion in the coming Kuala Lumpur Sukma.

The last time Sarawak was champion was 15 years ago. 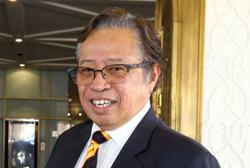