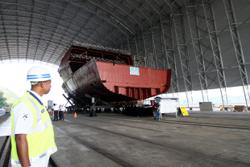 KUALA LUMPUR: Protesters at the anti-price hike rally on basic goods are demanding the government to lower the prices of goods if they want to avoid a large-scale rally on July 16.

"The first demand is we want the government to reinstate the subsidy on food items. The second is calling for the AP for imported food to be abolished.

"The third demand is calling a special Parliament session so that MPs can discuss the current food supply problem," he told reporters after the rally at Kampung Baru here on Friday (July 1).

Muhammad Faiz said a large-scale rally would be held on July 16 if the government failed to meet the demands.

Earlier, a small crowd of people gathered in front of Masjid Jamek Kampung Baru protesting against the current price hike of goods on Friday.

The protesters gathered at 2pm for about 30 minutes before dispersing.

On Thursday (June 30), Dang Wangi OCPD Asst Comm Noor Dellhan Yahaya said the protest organisers had not given any notice to the police on the rally.