KUALA LUMPUR: A Kuala Lumpur Federal Territory Social Welfare Department assistant officer told the Sessions Court here that Bella was thin and in a state of fear when he met the girl for the first time at Kuala Lumpur Hospital (HKL) last year.

Mohamad Imran Mohamed Zanyuin, 35, said when he visited the teenager with Down syndrome on July 4, 2021, she was seen to be sad as she walked with her head bowed, not looking at anyone and her hands were bandaged.

"I met Bella when she was in the Covid ward and she had scars on her face. She never smiled and she looked scared," he said during examination-in-chief by deputy public prosecutor Fazeedah Faik at the trial of Rumah Bonda founder, Siti Bainun Ahd Razali before Judge Izralizam Sanusi on Thursday (June 30).

Elaborating, the 12th prosecution witness said that on June 24, 2021, Siti Bainun messaged him on WhatsApp to inform that Bella had fallen and was scalded.

"Siti Bainun sent the message at 3.03pm and included several photographs of Bella's injuries on her hands and head. Siti Bainun said she had gone to the hospital and bought disinfectant spray.

"In the WhatsApp message, Siti Bainun also stated that Bella was Covid-19 positive but she did not take her for a swab test because she was afraid that she would be questioned on Bella's physical condition," added the witness.

To Fazeedah's question what action was taken after Siti Bainun informed about the hot water scalding, the witness replied: “I urged Siti Bainun to take Bella to the hospital and she said she would do so after the teenager’s quarantine ends on June 29, 2021.

"I asked Siti Bainun how was Bella's condition at home and Siti Bainun only informed me that the other children in the house were taking care of Bella," said Mohamad Imran.

The witness said the first time he met Bella after she was taken care of by Siti Bainun was on Feb 17, 2021 at the Kuala Lumpur Court for Children, and Bella looked cheerful and was seen hugging Siti Bainun.

Mohamad Imran said he had never agreed to Bella being placed under Siti Bainun's care because he did not know the woman personally and was unsure about her background.

However, he said the Magistrate's Court for Children allowed Siti Bainun temporary custody from July 14 to Sept 20, 2020 while permanent custody began from Sept 24, 2020.

Earlier, the witness said Siti Bainun had conveyed her wish to take care of the teenager to a child welfare officer known as Siti Sarah and based on discussions with Siti Bainun, the child was to be placed at Siti Bainun's family residence in Ampang.

"Bella is a child with disabilities (OKU) who needs to be supervised by others besides Siti Bainun, and family support is important in ensuring that her safety is always maintained,” he said.

The witness said Bella was previously placed at Taman Sinar Harapan Tuanku Ampuan Najihah Seremban from 2011 to 2020 before Siti Bainun took care of her, adding that Bella stopped schooling when she was under Siti Bainun’s care.

She is charged with committing the offences at a condominium in Wangsa Maju between February and June 2021. The charge framed under Section 31 (1) (a) of the Child Act 2001 provides a maximum fine of RM50,000, or imprisonment for up to 20 years, or both, if found guilty. 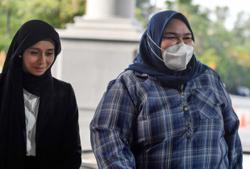