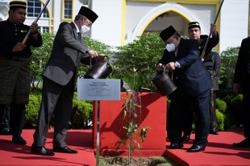 Before the meeting started at 11am, Tuanku Syed Sirajuddin took the salute at a Grand Guard of Honour (KKU) mounted by the First Battalion of the Royal Malay Regiment at the palace’s Main Square.

Tuanku Syed Sirajuddin then planted a Keriang tree on the grounds of Istana Negara to symbolise his chairing of the meeting.

The KKU and the tree-planting ceremony were mooted by Sultan Abdullah and had never been held prior to his appointment as the 16th Yang di-Pertuan Agong. The KKU was held for the first time at the 254th edition of the meeting, while the tree planting initiative was introduced at the 255th meeting.

The two-day meeting is being attended by all Malay Rulers except Kelantan, Pahang and Johor.

Also in attendance are the Yang Dipertua Negeri of Penang, Melaka, Sabah and Sarawak.

The last meeting of the Conference of Rulers was held on March 9 and 10, chaired by the Sultan of Terengganu Sultan Mizan Zainal Abidin. - Bernama