KUALA LUMPUR: Sabah-born Australian Foreign Affairs Minister Penny Wong (pic) has reflected on her Malaysian lineage and family history, as she affirms that the future of Australia and Asean is interlinked.

Wong, who was born in Kota Kinabalu where she spent her early years before moving to Australia at eight years old, is currently on her first official visit here.

As part of her three-day working visit to Malaysia, Wong had a networking brunch with government, business and civil society leaders on Wednesday (June 29), where she paid homage to her paternal grandmother for being her source of strength during hard times.

“It is an extraordinary privilege and honour to stand here today in Malaysia as Australia's Foreign Minister. I doubt my Poh-Poh could ever have imagined it,” said Wong in her speech at a hotel here on Wednesday (June 29).

ALSO READ: Penny has her family at heart

Wong said her late grandmother, Lai Fung Shim, who is of Hakka descent, had been in Sandakan when the war came to Malaysia.

Most of her family died in the war, said Wong, adding that her grandmother was left alone to care for her children in the most difficult circumstances.

“She was barely literate. She was loving and humble, and the strongest person I have ever known. In times of struggle, I think of her, and what she had to endure.

“Her determination to survive, and to save herself and her children, is something from which I draw strength every day,” said Wong.

Wong said her father, Francis Wong, was a bright student who worked hard, with his efforts earning him a Colombo Plan scholarship to study architecture at Adelaide University.

It meant he could climb out of the poverty he experienced as a child, said Wong.

“It meant doors opened that would have otherwise been jammed firmly shut. It meant he could come to Australia – a very different Australia from what we know today.

Her parents married and moved back to Kota Kinabalu, where Wong was born and spent the first eight years of her life.

She added that her father brought back with him knowledge and skills, becoming a notable figure in Kota Kinabalu, designing prominent civic buildings, although many had been replaced today.

“The value of that education has never left him. He always told me: “They can take everything away from you, but they can't take your education,” said Wong.

While Wong said her family history will be on her mind when she returns to Kota Kinabalu on Wednesday (June 29) for an overnight stop, she said that she is focused on the future.

“Australians know our future lies in the region we share with Malaysia.

“And it tells you something about modern Australia that I am here today speaking to you as Australia's Foreign Minister,” she said, adding that her Malaysian heritage is one of the 270 ancestries now represented in Australia.

“Australia will be reflecting this rich character back to the world, so the world can see itself in Australia.

On Tuesday (June 28), Wong met with her counterpart, Foreign Minister Datuk Seri Saifuddin Abdullah in a bilateral meeting that covered a wide range of topics concerning both countries as well as current regional and global issues.

Penny has her family at heart 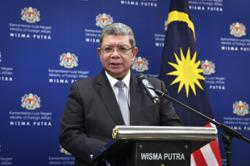