Ongkili to step down in three years, gives PBS time to prep successor

Ongkili said he was announcing the time-frame now so that the party has time to find and groom a suitable replacement.

“It (my stepping down) is either before or during our congress the third year from today,” he said after opening the PBS Youth and Women's wings annual congress and elections here on Tuesday (June 28).

Ongkili said the party can use this time to prepare his replacement and believed that potential candidates can be identified after Thursday’s (June 30) party polls.

“They have yet to prove themselves so I am giving them the chance to do so,” he said.

ALSO READ: PBS polls: All focus on tussle for No 2 post as party kicks off delegates meeting this week (https://www.thestar.com.my/news/nation/2022/06/27/pbs-polls-all-focus-on-tussle-for-no-2-post-as-party-kicks-off-delegates-meeting-this-week)

During these three years, party members and leaders can also prepare for the transition to new leadership, he added.

In his speech, Ongkili reiterated the party’s stand in continuing to fight for Sabah rights as per the Malaysia Agreement 1963 (MA63), to oppose all forms of party hopping, to safeguard the state's sovereignty, to protect Sabah from the influx of illegal immigrants, and to continue pushing for development.

“PBS also supports initiatives to revamp and preserve our struggles, vision and mission but at the same time, we hope all this can be done in the spirit of party unity,” he said.

He added that anyone was welcome to contest in the party polls but they must remember to do so for the good of the party, not to build camps or oppose one another for personal gain.

“We seek to be better for the party every day,” said Ongkili, who was made acting president in January 2017 and officially took over in November 2018.

Dozens of positions are up for contest including two deputy presidents, five vice-presidents, 16 supreme council members, 13 Women's wing and over 10 Youth chief and exco posts.

The list for the Youth and Women's posts are expected to be announced by 8pm on Tuesday.

The rest of the party polls continue until Thursday (June 30). 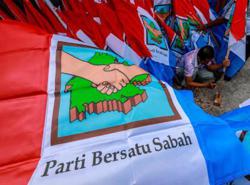