SHAH ALAM: A 47-year-old lawyer claimed trial at the Sessions Court here after he was charged with criminal breach of trust.

Mohd Zawahid Ya, is accused of misappropriating RM1.52mil that was entrusted to his firm Messrs Mohd Zawahid & Co.

Mohd Zawahid was charged under Section 409 of the Penal Code which was read to him before judge Helina Sulaiman.

If found guilty, Mohd Zawahid was liable to a jail term of up to so years with whipping as well as a fine.

Helina set bail at RM50,000 with one surety and fixed Aug 9 for the case to be mentioned.

He was also ordered to surrender his passport to the court.

Earlier, Muhammad Uzair had requested the court not to offer any bail as the alleged crime was serious and the money involved was a big sum.

However, the defence lawyers pleaded for bail and a low amount as the accused was supporting his wife and five children as well as his parents. 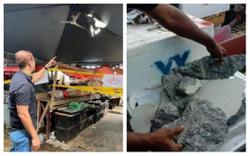