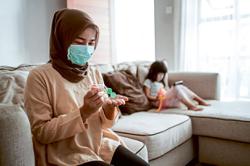 PUTRAJAYA: The large-scale enforcement of Ops Patuh, which was implemented to curb non-compliance of Covid-19 standard operating procedures (SOP) at the national level, was terminated on June 25.

Home Minister Datuk Seri Hamzah Zainudin said this was because the country has entered the transition to the endemic phase.

The committee - spearheaded by the ministry - involved 32 ministries, departments and agencies, enforcing directives and laws on the ground to curb the spread of Covid-19.

"Throughout Op Patuh until June 25, a total of 5.55 million inspections were carried out. Of the total, some 13,143 compound notices were issued, and 6,383 premises were ordered to close,” he told reporters after the committee's appreciation ceremony Tuesday (June 28).

Hamzah said the government had also decided to end the appointment of officers authorised under the Prevention and Control of Infectious Diseases Act 1988 on June 30.

"As the country entered transition to the endemic phase, the police will continue to collaborate with the Ministry of Health on the enforcement of SOP and transition to endemic protocols under the Police Act 1967,” he added. – Bernama

All set to move into endemic phase