ALSO READ: Cops to be given list of nightclubs dealing with drugs, says former IGP

"The police have always taken action on activities involving distribution and abuse of drugs throughout the country with a total of 55 raids on entertainment centres conducted in Kuala Lumpur between January and June this year.

"Some 194 raids were conducted across the country during the same period," she said in a statement Sunday (June 26).

"A total of 124 cases were recorded with 160 people arrested for offences under the Dangerous Drugs Act 1952.

"Nationwide, similar raids led to the seizure of 9,208.81g of various drugs as well as 450 liters of liquid drugs.

"A total of 449 cases were recorded with 504 people arrested," she said, adding that in order to prevent immoral activities, Bukit Aman CID has run operations at targeted locations such as massage parlours, hotels and entertainment centres.

She said total of 995 raids were conducted between January and April with a total of 2,948 people arrested for alleged prostitution and entertainment outlet activities nationwide.

"In Kuala Lumpur alone, a total of 420 raids were carried out with 1,115 people arrested.

"Some 55 raids were also made through joint operations with 177 arrests made," she said, adding that the police were always conducting intelligence and monitoring social sites and applications, which were allegedly advertising prostitution.

She said the police were also working with the Malaysia Communications and Multimedia Commission to monitor and block Internet websites hosting and advertising such activities.

She urged anyone with information on such activities to contact the NCID hotline at 012-208 7222 or contact the Bukit Aman CID via the jsjd7_maksiat@rmp.gov.my email.

Cops to be given list of nightclubs dealing with drugs, says former IGP 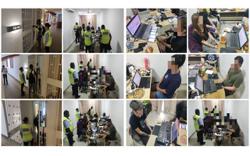